As we enter the month leading into Civil War, I felt like it would be prudent to try and start wrapping up some of the loose ends from the big movie characters, and it seemed like a good idea to work on a character that is probably not going to be developed anymore ever. 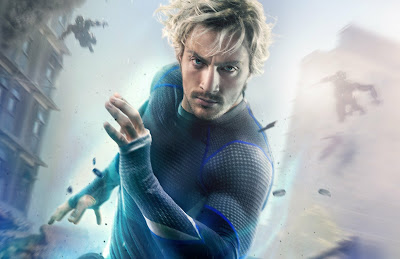 The country of Sokovia is small and has been occupied several times in recent history. The Maximoffs participated in riots against foreign forces until they were approached by a HYDRA scientist offering to give them great power. Pietro was utterly convinced to accept, and he was brought with his sister to a secret experimental facility, where the scientists subjected them to the mysterious chitauri scepter. While many volunteers perished, Wanda and Pietro survived with incredible abilities.

Several months after these experiments began, the facility that the twins were in was assaulted by the Avengers attempting to retrieve the scepter. In the confusion, and against the wishes of Baron Von Strucker, Pietro and Wanda escaped to disrupt the assault. Pietro intercepted and smashed into Hawkeye, dropping him to the ground before speeding off and slamming into Captain America and returning to his sister inside the fortress. She convinced him to let Tony go and deconstruct the Avengers from the inside. As HYDRA fell, the twins escaped.

Pietro began to steal to provide for his sister, but Ultron caught wind of them and convinced them to assist him in his conquest against the Avengers. The twins joined him at the salvage yard to attempt to intimidate Ulysses Klaue out of his vibranium stores. During this incursion, the Avengers arrived, and the twins assisted in fighting them off, along with Ultron's drones. After the battle, in Seoul, Wanda realized that Ultron really wanted to destroy humanity, and the twins escaped away from him.

Later, they intercepted Ultron on the Seoul train, keeping him from pummeling Captain Rogers against the train wall. Ultron blasted the train controls, however, and Pietro sped away to save civilians while his sister worked to stop the runaway train. Cap brought the twins to Avengers tower where they found Stark and Banner attempting to work on the Vision. While Cap and Tony argued the merits of creating another A.I., Pietro sped through and unplugged all the machinery, though Thor broke in at the last minute to power the cradle back on.

After some deliberation, the twins joined the Avengers to return to Sokovia and fight Ultron one last time. Pietro and Wanda began the evacuations, and Pietro jumped straight ahead to begin smashing the Ultron drones. He happily assisted in defending the keystone with the rest of the Avengers, but when he saw Ultron's quinjet coming in for a strafing run against Barton, he sacrificed himself to save his new ally.
—DoctorBoson
Posted by doctorboson at 1:00 PM

From the ass that brought you Savage Everything! comes a blog solely dedicated to the Savaging of heroes, villains, and Extras from the Marvel Cinematic Universe (shorthanded as MCU)!
For those that are unaware, the MCU is the collection of movies and shows beginning with Iron Man back in 2008 produced in-house by Marvel. This includes The Avengers, Captain America: The Winter Soldier, Guardians of the Galaxy, and Daredevil, among other works.
Again, to reiterate from the Ground Rules post, this will only be pulling from sources canon to the MCU—including some of the tie-in comics—but I won't be pulling from the comics universes, nor from movies produced by Fox or Sony, or any of the DC-verse (depending on how the cast ends up, I may end up creating their own separate Savageverse blog as well). If I miss a character (somehow) that you think deserves a spot on the blog, let me know!
If you like the MCU, check out the unofficial wiki for a fair bit of juicy content.

“This game references the Savage Worlds game system, available from Pinnacle Entertainment Group at www.peginc.com. Savage Worlds and all associated logos and trademarks are copyrights of Pinnacle Entertainment Group. Used with permission. Pinnacle makes no representation or warranty as to the quality, viability, or suitability for purpose of this product.”